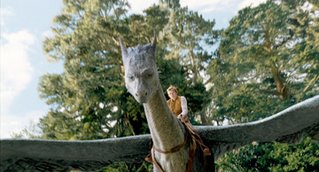 Eragon, the most highly advertised movie in a long while, opened yesterday. Brandon and I had the day off so we went to a nearly empty theatre for the 12:30 show, an Orange Julius in hand (pina colada with banana actually).
Overall I give the movie a B rating. Fortunately I haven't read the book yet, so I was saved any disappointment on that account. It is an entertaining fantasy film, appropriate for older children, but a bit too scary for younger ones.
Let me first tell you the good things. Good storyline, great special effects, really bad badguy, good acting, cool dragon, good chemistry between characters, good characters (though many were underdeveloped). Sadly, the film was less than 2 hours long and it left something to be desired. You wanted to see more development of the boy, more of his training, more of his mentor, more development of his dark friend, more of his learning fighting, the elvish language, and magic, etc.
The biggest problem with this film can be described in one word, "formulaic." Even if I spelled that wrong, it is an accurate description. They took what appeared to be a great story, cut it too short and Hollywooded it too much. Some pretty poor scriptwriting and some cliche lines and predictable happenings made it kind of weak.
All that said, I still recommend it and think most of you will enjoy it. We did.
Posted by Emily at 8:09 AM 3 comments:

The Truth About Santa Claus

(I got this story as a forward from my Grandma Aggie today. I is a story I hope I never forget.)

I remember my first Christmas adventure with Grandma. I was just a kid. I remember tearing across town on my bike to visit her on the day my big sister dropped the bomb: "There is no Santa Claus," she jeered. "Even dummies know that!"
My Grandma was not the gushy kind, never had been. I fled to her that day because I knew she would be straight with me. I knew Grandma always told the truth, and I knew that the truth always went down a whole lot easier when swallowed with one of her "world-famous" cinnamon buns. I knew they were world-famous, because Grandma said so. It had to be true.
Grandma was home, and the buns were still warm. Between bites, I told her everything. She was ready for me. "No Santa Claus?" She snorted...."Ridiculous! Don't believe it. That rumor has been going around for years, and it makes me mad, plain mad!! Now, put on your coat, and let's go."
"Go? Go where, Grandma?" I asked. I hadn't even finished my second world-famous cinnamon bun. "Where" turned out to be Kerby's General Store, the one store in town that had a little bit of just about everything. As we walked through its doors, Grandma handed me ten dollars. That was a bundle in those days. "Take this money," she said, "and buy something for someone who needs it. I'll wait for you in the car. "Then she turned and walked out of Kerby's.
I was only eight years old. I'd often gone shopping with my mother, but never had I shopped for anything all by myself. The store seemed big and crowded, full of people scrambling to finish their Christmas shopping. For a few moments I just stood there, confused, clutching that ten-dollar bill, wondering what to buy, and who on earth to buy it for. I thought of everybody I knew: my family, my friends , my neighbors, the kids at school, and the people who went to my church. I was just about thought out, when I suddenly thought of Bobby Decker. He was a kid with bad breath and messy hair, and he sat right behind me in Mrs. Pollock's grade-two class.
Bobby Decker didn't have a coat. I knew that because he never went out to recess during the winter. His mother always wrote a note, telling the teacher that he had a cough, but all we kids knew that Bobby Decker didn't have a cough; he didn't have a good coat. I fingered the ten-dollar bill with growing excitement. I would buy Bobby Decker a coat! I settled on a red corduroy one that had a hood to it. It looked real warm, and he would like that.
"Is this a Christmas present for someone?" the lady behind the counter asked kindly, as I laid my ten dollars down. "Yes, ma'am," I replied shyly. "It's for Bobby."
The nice lady smiled at me, as I told her about how Bobby really needed a good winter coat. I didn't get any change, but she put the coat in a bag, smiled again, and wished me a Merry Christmas.
That evening, Grandma helped me wrap the coat (a little tag fell out of the coat, and Grandma tucked it in her Bible) in Christmas paper and ribbons and wrote, "To Bobby, From Santa Claus" on it.
Grandma said that Santa always insisted on secrecy. Then she drove me over to Bobby Decker's house, explaining as we went that I was now and forever officially, one of Santa's helpers. Grandma parked down the street from Bobby's house, and she and I crept noiselessly and hid in the bushes by his front walk. Then Grandma gave me a nudge. "All right, Santa Claus," she whispered, "get going." I took a deep breath, dashed for his front door, threw the present down on his step, pounded his door and flew back to the safety of the bushes and Grandma. Together we waited breathlessly in the darkness for the front door to open. Finally it did, and there stood Bobby.
Fifty years haven't dimmed the thrill of those moments spent shivering, beside my Grandma, in Bobby Decker's bushes. That night, I realized that those awful rumors about Santa Claus were just what Grandma said they were: ridiculous. Santa was alive and well, and we were on his team. I still have the Bible, with the coat tag tucked inside: $19.95.

May you always have LOVE to share, HEALTH to spare and FRIENDS that care....And may you always believe in the magic of Santa Claus!
Posted by Emily at 8:24 AM 4 comments: 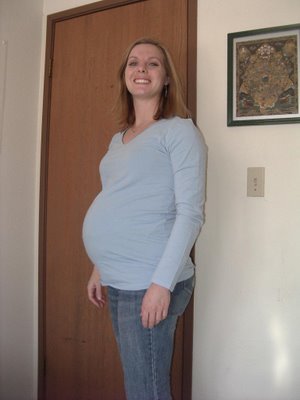 I think it's a combination of the angle of the shot and the way I am standing, but I look HUGE here. But that's okay with me, I'm really not very uncomfortable AND I'm 3/4 of the way thru my pregnancy now. Only 10 weeks to go! Brandon says I look like I swallowed a basketball.
Posted by Emily at 6:03 PM 7 comments: 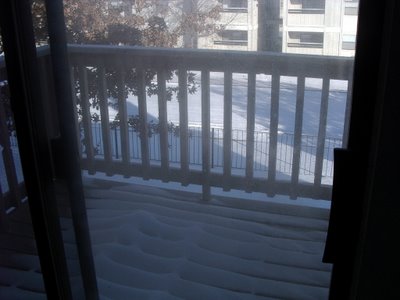 Unlike in Utah, where it would take about 3 feet of snow to shut anything down, here in Oklahoma it's a whole different story. We get snow about 5 times a year. It always begins with freezing rain, then sleet, then snow (or would it be than?). That means there's a nice, thick sheet of black ice under the snow and roads are extremely treacherous. Snow in Utah is very soft, big, fluffy, and wet. OK snow is dry and crunchy and it usually kind of hurts, small ice chunks more than flakes a lot of the time. We actually got some soft flakes on Thursday.

So we woke up Thursday morning with freezing rain but very little snow on the ground after reports on Wednesday of the worst storm Oklahoma has seen in years on every news station. Well, it ended up being a pretty good storm and the roads were really bad on Thursday, but I think people got overly excited because it was the first snow of the year and such. Thursday all the schools were closed, which meant I didn't have to work and Brandon didn't either. We really enjoyed our day inside watching the snow fall, watching tv, baking, snuggling, eating, etc.

I made one of my favorite (and extremely easy) recipes. It had been almost a year since I last made it, what a shame. I got this recipe from my friend Ann from Hawaii a few years ago.

Beat all together and add to three greased loaf pans. Test for doneness before removing from oven. Bake 45-60 mins. at 325 degrees. Delicious!!

Been enjoying that bread for 3 days. I especially liked it this morning accompanied by hot chocolate.

Silly enough, all the schools closed again yesterday. We were a little stir crazy and went and wandered around Walmart for awhile in the afternoon. Then watched the rest of our My Name is Earl dvd (best show around) that we'd rented from Netflix (I don't understand why everyone doesn't join). Last night we decorated our little 3 ft. tree. It looks great! Brandon is a little disappointed that we didn't get a bigger and/or real tree this year, but we leave out of town on the 21st so I just didn't want to. We put lights up all over the dining room and a few other decorations out too. The cats haven't eaten any ornaments yet, so that's good. We've also been enjoying a lot of Christmas music. Our favorites have always been Bing Crosby, but we also really like the Charlie Brown soundtrack, the Nutcracker ballet soundtrack, and the Harry Connick Jr. cds. Yesterday at Walmart we bought an excellent Elvis Christmas cd and Christmas with the Rat Pack which is also quite good.

Hope you are enjoying the first few days of December! Love you.
Posted by Emily at 9:26 AM 5 comments: