I know I've hardly blogged in the past 13 months and I'm not sure if I'm going to start doing it regularly again, but I have the urge to right now, so I might as well.

Sunday, Sept. 29th - I had invited all of the local B. family (my dad's side) over for a soup potluck.  I thought all I had to do was my regular kitchen cleaning, sweep the floor, whip up some soup and scrub the bathroom.  Saturday I didn't get around to it.  I took the kids to see my friend's kittens and then to the mall (Jonah had requested going to the Disney Store and Teavana earlier in the week, so unexpected and funny.). 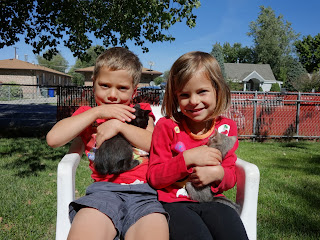 That evening we left the kids with a babysitter and went to our friend Kim's birthday party.  No housekeeping was done.
I am very embarrassed to say that I spent about 6 hours cooking, cleaning and organizing on Sunday (while Brandon was busy painting the cabin).  I thought I would simply tidy up the kitchen and whip up some soup that morning before 1:00 church, but I ended up dropping the kids off at the last two hours of church and then picked them up but didn't go to a single meeting myself which I felt really bad about because I wanted to go but I hadn't realized how messy my house was.  And I didn't even remember to clean the bathroom!  I spent a bunch of time organizing the kids art and school supply corner though.  I'm an idiot.
Anyway my dad's three brothers, their wives, six of my cousins (ages 8-31), one of their husbands, and Skye's three kids all showed up for dinner.  We had a blast eating and talking and hanging out.  Barely even saw the younger kids around.  The soups were all fantastic too.  So busy with 16 extra people in my house that I never even snapped a single picture:(

Tues. - Elora has gymnastics at 1:00 and Jonah started gymnastics in a boys' class at 4:30 so I spent 2 hours there that day (and every Tues for at least the rest of the month).

Wed. - woke up to houseguests.  Karen & Landon (my sister & her fiancee) arrived late in the night.  I cleaned the "guest room" (aka: weird tiled, empty playroom in the basement without a door) and made them a comfy, clean bed on a mattress on the floor before I went to bed the night before.  Again I didn't get around to cleaning the bathroom (basement bathroom this time).  At least the toilets were all recently scrubbed even if the mirrors, counters, and floors aren't looking very good.
Made lamb spinach curry for dinner for the six of us.  Elora didn't care for it (she doesn't like anything these past couple weeks) but everyone else LOVED it.  Stayed up late having fun with Karen, Landon, and Brandon.

Thurs. - this is when the real madness began.  Made a big breakfast for the gang (new pancake recipe is THE best I've ever tried) and then Landon and I dropped the kids off at school.  Had to pick Elora up 15 mins early from school to drop her off with our neighbors so I could run over to my cousin (Brandon's cousin's daughter actually) Vanessa's wedding luncheon at Tuscany.  It was fun sitting by Alisha (B's cousin's wife) and catching up with her as I haven't seen her in months, maybe over a year. Picked Elora up and then changed clothes and picked Jonah up 20 mins early from school and took them to two stores looking for a gem-toned dress to wear to Karen's wedding on Saturday.  No luck.  Dropped the kids off with their grammy and headed to the Draper Temple for Vanessa and Shane's wedding ceremony.  Lovely. 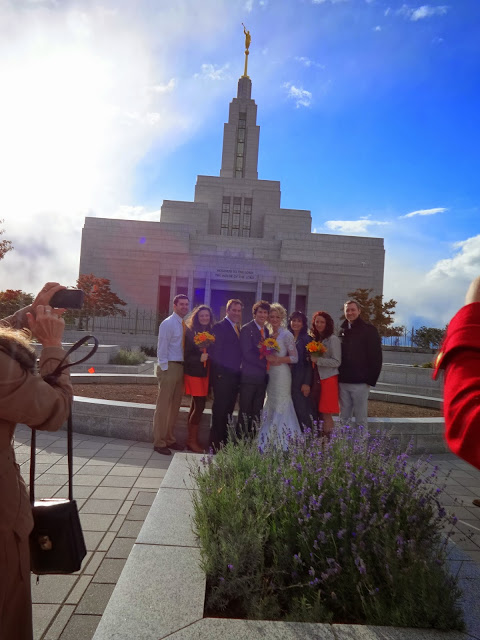 (Vanessa's family)
Picked the kids up from Linda.  Ran home to change into something warmer.  Took the kids to their school for their fall festival (annual PTA fundraiser).  Had to leave and run to the ATM to get cash.  Had dinner, played games, bought cotton candy. 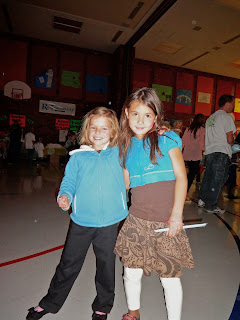 (Elora with her friend Stella)
Came home at 8:00pm.  Brandon had gotten home from work a half an hour earlier and my parents and three youngest siblings had arrived 15 mins. earlier.  Got my kids in bed.  Made three beds for the five guests.  Watched 20 mins of Arrested Development with Spencer.  Went to the airport to pick up Amanda (one of Karen's best friends) and drove up to Park City to drop her off with K & L.  Snowed in P.C.  They stayed up at the cabin that night.  I drove home. 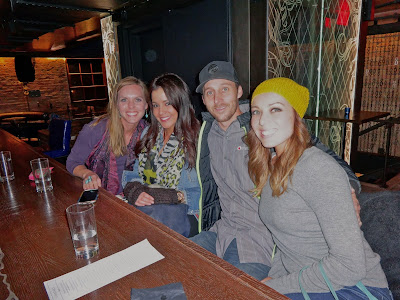 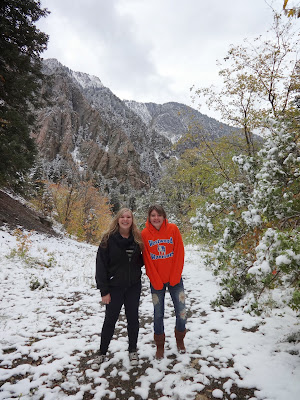 (Claire, almost 15 & Catherine (our new sister), 16)
Picked Robin up at the airport around 1:00.  Spencer & my parents were back from Spencer's wisdom teeth removal so we checked in on him.  Left mom with my kids and did a late lunch with dad and four of his daughters :)  The sushi was good and I was surprised that my sisters all like it.
Got out winter clothes, kissed my kids, and headed up to the cabin with Chrisy (Sarah's best friend) and Robin.
Karen cried when the last of her wedding party guests arrived.  We all had a good time together.  We made gourmet tinfoil dinners.  My brother Adam and about 15 of Karen's closest friends were all there for dinner, fun, and a sleepover.  I drove an hour home so I could see my kids in the morning. 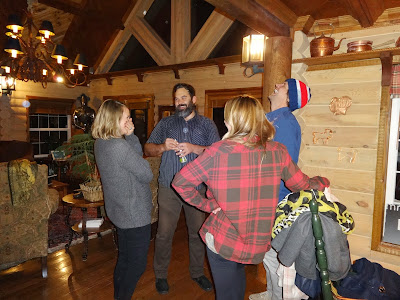 Sat., Oct. 5th - Had breakfast with my families.  Got ready, packed up a few things, tidied up, etc.  Finally tried on the dress that Amanda brought me and thank heavens it worked.  Ran to four stores to pick up five things.  Karen & Landon made last minute changes to the menu last night and I had to get ingredients.  Drove up to the cabin by myself.  Made soup.  My friend Raquel arrived.  Karen hired her to cook the wedding dinner.  I gave her instructions on how to make everything (cheese plates, green salad, pork tenderloin, pear & ginger topping, savory sweet potato side dish).  Got ready.  Wedding!  Gorgeous ceremony.  Pictures.  Cheeses, crackers, jams, fruit.  Socializing.  Dinner.  Toasts.  Partying. 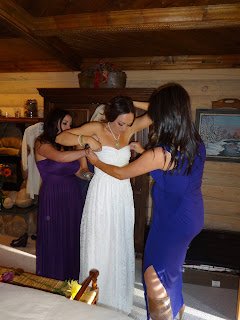 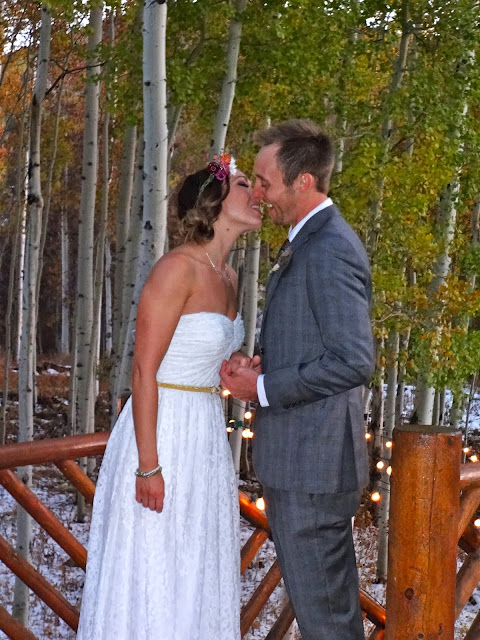 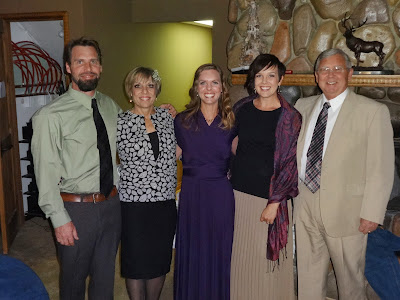 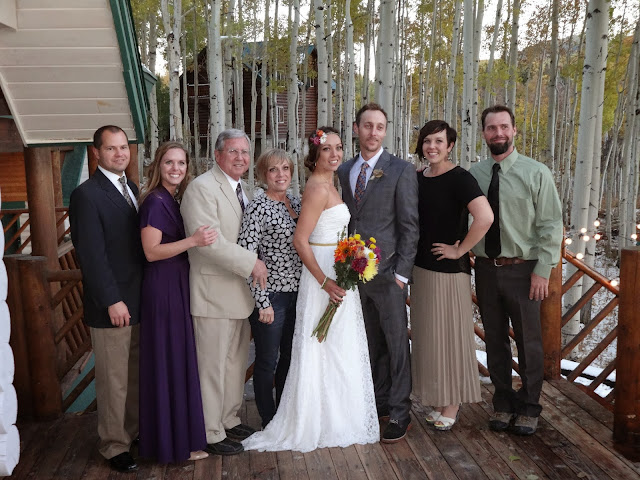 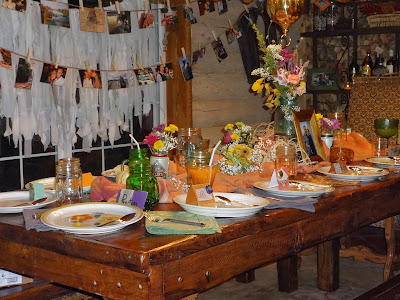 Hot tubbing.  Driving home with Brandon and Robin giggling at 2am.

Sunday - My family got up early and drove back to AZ.  After 3.5 hours of sleep, I was up and taking Robin to the airport.  Watched the morning session of General Conference.  That afternoon I drove the hour back up to the cabin to help do laundry and tidy up.  Took a nap, did dishes, packed up leftovers, my table, etc.  Dropped leftovers and cash off for Raquel.  Took the baker back her trays, displays, etc.  Home.

It was a great week and a beautiful celebration of love.  It was a lot of driving and there has been a lot of residual laundry but things are settled down.  Maybe I'll find a routine for this school year sometime soon!  It was great having so much family around.