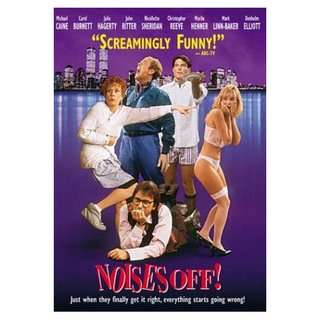 Wives and Daughters- If you love the 1995 BBC Pride and Prejudice, you'll love this too. I actually like this even more!

The 10th Kingdom- originally a made for TV movie series. It's 7 hours long and fun every minute. No, the acting isn't the best and the trolls are ridiculous, but I guarantee that you'll laugh, a lot. Magical.

Cold Comfort Farm - Kate Beckensdale and Ian McLellan (sp?) in a little known British gem of a film. Kate also did a version of Emma that is very good and her character in this movie is very similar (I can't spell).

Darby O'Gill and the Little People - Do you like leprechauns? Me too. I believe this was Sean Connery's first movie. I love the part with the Ban-shee.

Horatio Hornblower (Any or all 8 movies) - the perfect man. A truly noble hero. I love him.

Incredible Adventures of Wallace and Grommit - all three are great! Better than the wererabbit.

Legend - Why haven't people seen this? I think it was Tom Cruise's first movie. The ultimate Good vs. Evil. Tim Curry is unrecognizable as the devil and oh, so scary! The heroine is the gal from Ferris Bueller's Day Off.

Noises Off - Carol Burnett, Christopher Reeve, Nicolette Sheridan, John Ritter, Michael Caine... an all-star cast. SOOOOO funny! If you've ever been in a play, this should be mandatory for you to see.

Any Miss Marple movie (starring Joan Hicks, not the other ones) - I can't get enough of this knitting old lady detective. Another Agatha Christie creation.

The Thin Man (or any of its sequels) - The funniest, cutest couple you'll ever see on-screen. Murder, intrigue, and a clever dog.

Scarlet Pimpernel (1982 version) - Again, I'm scandalized if you haven't seen this. This is one of Brandon's all-time favorites (mine too). If you like The Count of Monte Cristo, you'll like this too. French revolution, British fops, Ian McLellan, Jane Seymore, lots of laughs and a plot that will keep you on the edge of your seat.

Village of the Damned - black & white, classic horror, horror is really too strong of a word. Suspense/Mystery is closer. Either way, it's facinating.

The Manchurian Candidate (original) - Angela Lansbury as the villian! I mean come on, just knowing that should make you want to watch. She's evil.
Posted by Emily at 10:23 PM

i LOVE cold comfort farm. it is so funny! i will have to check out some of these others on your list.

MOst of these I have never seen and need to. I did watch why didn't they ask Evans? and rather enjoyed it, thank you! I would like to challenge you to find and watch High Strung, an obscure Ben Stiller with a bit about milk and cereal that you should like. I have been trying to find it on DVD to buy. No such luck so far.

Dear Emily, you should perhaps see the original version of Bedazzled. And by perhaps I mean 'definitely'. One of my favorites and an old British film which is how I KNOW you would appreciate it.