We are staying at my in-laws rather non-childproof home.  I was in the kitchen in search of some panko bread crumbs and the kids were supposed to be washing their hands.  I walk into the bathroom to find Elora sitting on the counter looking in the mirror and snipping away at her hair with a tiny pair of sharp scissors.  I just gasped and said, "Oh my gosh, what is going on here?!"  I stood there stunned and dumbfounded.  Brandon came rushing into the room to see what was the matter.  He reacted badly and she lept into my arms crying.  He got over it moments later and Elora told us that Jonah did it first.  We called her brother to come downstairs to us immediately.  I hadn't seen any of his hair on the counter or in the sink.  His haircut was far worse than hers!  I reacted badly, mostly because I had paid $15 for him to get a haircut a couple hours earlier!  I got over it quickly too but by then both kids were in tears.  They cried and hid.  We snuggled them and told them we could get their hair fixed and that we weren't mad and not to do it again.  Neither of them would let us take a picture.
"I was just trying to make a line!" - Jonah said in his defense 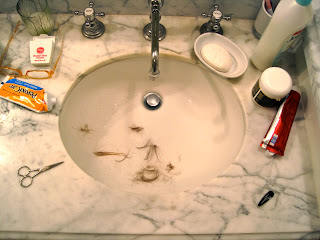 When I went to clean up I discovered that all of Jonah's hair was in the trash.  This struck me as incredibly funny.  I just imagined Elora standing there watching him cut his hair and thinking how terrible it looked and deciding she could do a much better job if she could just look in the mirror while she gave herself some layering and trimmed up her bangs.
When I tried again to get a photo of Jonah a several minutes later he burst into fresh tears telling me how terrible it looked and how he didn't want a picture of it.
I went upstairs probably ten minutes after the incident and found Elora hiding behind clothes in Katie's closet still just crying her little heart out.  I held her and comforted her for five minutes but I couldn't figure out why she was so sad or what to do to make her feel better and finally I took her to snuggle her dad, who also couldn't quite get her to cheer up until he finally decided they needed Otter Pops, which did the trick.  I finally managed to get a few photos when they were eating dinner. 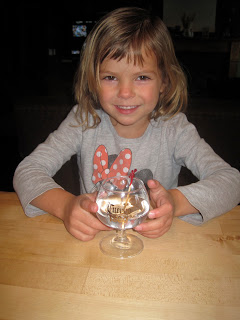 (Elora made herself a cocktail) 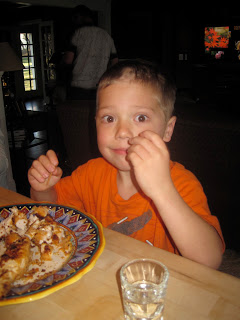