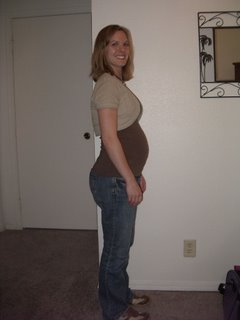 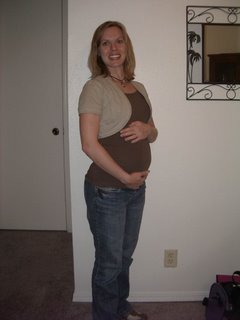 My pregnancy is halfway over! I can't believe it. Here's my belly at 21 weeks. As of last week I had gained 10 lbs. How will I be able to carry 15-20 more?! I love my belly. I like the size bigger boobs too. Things have been pretty easy up to this point, let's hope they continue that way.
Posted by Emily at 6:37 AM 5 comments: 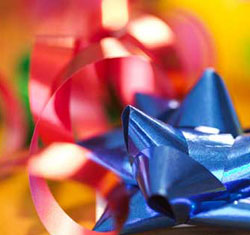 For those of you who asked about my birthday.

I had an absolutely fantastic birthday this year. It started about a month ago really. I'd told people I was shopping for a new blender. My mother-in-law told me she loved hers and that she would get me one just like it for my birthday. About a week later I got a blender, a mortal & pestal, a Led Zeppelin cd, and a dvd in the mail from amazon. She said it was much easier to do it in August than to wait til the beginning of the school year when she would be swamped. Thanks McBrides!!

Last week I decided I wanted a birthday party. I haven't had a party in a couple years and I wanted one. I decided to do a girl's night, just good food and games (It's my birthday and I'll do what I want, nobody came up with anything more appealing and I'm a geek and a homebody). I invited my five best Oklahoma girlfriends, several gals from church that I've been wanting to get to know better and about 3 other friends. I posted an invitation on evite and didn't have to do much else.

Wednesday was my actual birthday. Friday I received a great birthday package from my best friend, Jen, in Utah. Tuesday I received a birthday card and spending money from my parents, a cd from my sister Robin, and a big box from my husband's dad's wife, Linda. Wednesday morning I didn't have to work and B didn't have to be at school. We slept in late, had waffles for breakfast, and enjoyed a lazy morning. I opened my package from the Jensens and was thrilled that it was stuffed full of new maternity clothes and a few other treats. I taught all afternoon and when I got home Brandon took me to Shogun Japanese Steakhouse, a Hibachi grill place where they cook your meal right in front of you. It was highly entertaining and very tasty. He got me an amazon gift certificate (which I already ordered a dvd and cd with) and a camelbak:) I got phone calls all day from my loved ones and several seranades of the Happy Birthday song. It was a GREAT day.

Last night was my little party. Eight people (my favorite party guest #) showed up (Lacey, Megan, Alisha, Jennifer, Victoria, Jenny, Rachel, and Sandra), all my favorites, and we had a great time. There was great conversation and food (especially Alisha's from scratch chocolate cake) and we never even bothered with the games. Three of my guests were over til about 2 am! That's a late night for any of us. The birthday is finally over and I am completely satisfied. Thanks!

Yesterday Brandon and I went in for my sonogram. We both agree that it was truly the most fun, exciting thing that has ever happened to us. It is indescribably miraculous to get to see the baby inside your uterus moving around and to see the organs and bones and experience the wonder of life inside yourself.

Our little boy has 10 fingers and 10 toes, a working liver, 2 kidneys, bladder, healthy spine and tailbone. He is very wiggly.

My 19 year old brother is currently serving a full-time mission for our church. He is living in Madagascar. Here is some perspective from people halfway around the world in a developing country. This is a blurb from his last email that I found extremely interesting:

"kids here have some of the most ridiculous games. 1)little girls are always playing the rock game. they take a few fist sized rocks and make a family and talk in different voices for them, and when one is talking to another they hit the one listening with the one thats talking in rythm. funny. 2)boys play karate fight. not just wrassling, but taking karate stances and making chinese sounds when they kick or stomp and roundhouse kicking all the time. 3)playing soccer with balls that are so worn out it would definitely have been trash in the states , or with balls made of plastice bags smushed together and held with string or rubber.
funny experiences---walking around people always say "good morning" to us in english (even if it is 8 at night ) and every now and then they want to try to talk more english so they stop and either say the normal hello how are you doing stuff or just random english. but they slur alot together and we cant tell what they are saying so we are like, "what? i dont understand" very slowly and clearly for them and like 3 times this week teenage guys have just been like "yes. i am not very good speak english" and then just walk away without saying anything else. its pretty funny and sad too, cuz you can tell they thought they were pretty good, but im pretty sure the teachers are the problem. we have 2 former investigators that taught english classes that were horrible at english. haha and all the teenage guys sound like kermit the frog when they switch to english, but just normal in malagasy. nice people.
---another story. the other day we went to an investigators and talked with his family and the mom had the funniest things to say. she asked where we were from and we told her Amerika and she was all, "Oh, from Paradise" (which is just paradisa in malagasy ) so that was pretty funny, then we talked about why its not exactly paradise and her argument was "Well, there arent any poor people in America" and when we explained that there were she was so gaga, or astonished or baffled, and then said, "Well there aren't any ugly people in America." pretty much how they know about america is through big films and music videos, especially pop and rap ones. so its a little one sided. its kind of a joke with malagasy's that all they do is eat rice, pray, and sleep. haha. rice is their life essence. i love it. oh, alot of malagasy's are blown away when they find out that Amerikans eat rice too. haha alot dont know that you can get it in amerika. haha. i love their simple minds. anyways, then the mom was talking about our eyes and she thought that all blue eyes could see perfectly and elder blaylock said "That not true. I'm blind almost" they all laughed like it was the funniest thing ever until he started explaining about contacts. man, she was seriously blown away by that. by that time she was pretty much yelling everything just cuz she was so amazed and then after we explained them i took one of mine out and showed her and she threw her hands up and just held her head for a sec, then pretty much yelled, "AMERIKANS ARE SO SMART. THATS GENIOUS. THEY ARE SO ADVANCED. GLASSES IN THEIR EYES." then she was asking if we could still see off to the sides and she was just so amazed. that was probly the funniest night ever since i have been out here. plus it just makes it that much funner to understand her in a foreign language and to see her face, and in malagasy the word for glasses means literally "eye replacements". somehow in the context that just made me laugh harder too. whoo-wee."
Posted by Emily at 11:28 AM 1 comment:

Sniffled 2 or 3 times yesterday. Last night my throat started really hurting. This morning I woke up miserable! My head aches, my throat hurts, snot is dripping, my body aches... It's my own fault, I've stayed up late too many nights in the past two weeks and that always does it to me. I just had a bowl of cream of wheat and a cup of hot mint tea. The humidifier is on in my bedroom and I'm heading back to bed after I take some benedryl. My boss says I shouldn't, but if, after I've rested and been drugged, I feel any better, I want to go to school for my 2 high school kids and give them the Romeo & Juliet tests I worked so hard on. They each get their own. ANYway...
Posted by Emily at 9:08 AM 3 comments:

States I've Been To 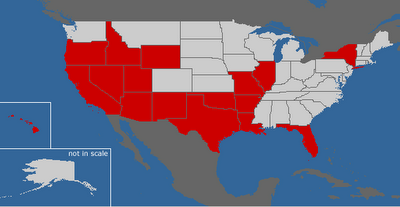 http://www.world66.com/myworld66/visitedStates/statemap?visited=AZARCAFLHIIDILLAMONVNMNYOKORTXUTWY">
> your own visited states map

Stole this idea for a blog from my cousin-in-law, Stephanie. Hers was a world map, but since I've only stayed in four countries, it looked pretty bare. Singapore isn't even visible on a map that small. My state map leaves a lot to be desired in the east.... Someday! 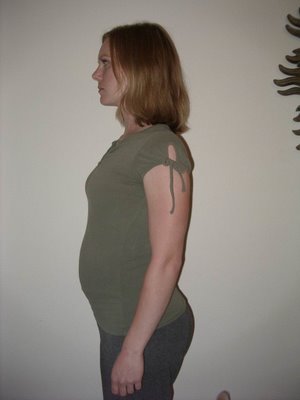 Today I am at my 18 week mark in my pregnancy. Everyone comments on my belly now. I like to rub it and poke at it and talk to it. Tomorrow I will schedule my sonogram for sometime in the next 3 weeks.
Posted by Emily at 5:44 PM 5 comments:

I used to have a huge 200-and-something item ongoing wishlist on Amazon. It felt like retail therapy just to put things on the list and imagine having all of them. Now I keep my list down to 25 items, in case someone actually wants to shop from it, which my in-laws often do. Whenever I want to add something to the list, I make myself either remove something else from the list or not add it.
Here are 15 items off my current list. I think people's desired possessions are revealing into their personality. What's on your "wishlist"?


Art of Homemaking by Daryl Hoole


Catch a Fire: The Life of Bob Marley by Timothy White


Men Fake Foreplay ... And Other Lies That Are True by Mike Dugan 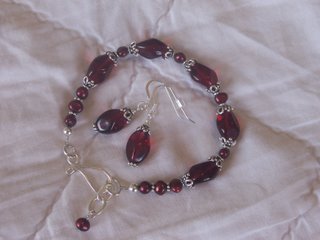 I stole this idea for this blog from Robin. I also have a friend who makes wonderful and unique gifts. This is the picture of the bracelet and earring set I bought last week. It was handmade by my talented friend, Sara Jane. You can find her website at: http://www.sterlingandstonesjewelry.com/ it also has a link to her e-bay shop. My favorite pair of earrings is also something I bought from Sara Jane. I am planning to use her for gifts in the future. It will be nice to give people something one-of-a-kind.
Posted by Emily at 10:13 AM 1 comment: